From the airport, my first stop in Berlin was a stop at my new home. I had received little information on what to expect at my residence: Would I be living with a family? A couple? An individual? Would there be other students living with me? What would the quirks be of my new host family? Fetishists? Nudists? Cannibals? In Berlin, the possibilities are endless.

I found my building easily enough; I walked through the entrance to a large foyer. To the left was a flight of stairs and to the right I saw a courtyard behind the building with a garden, bicycle parking, and several different cans for recycling and trash. It's near impossible to get people to recycle in Philadelphia, let alone get them to throw their trash into a garbage can at all, but here people fastidiously separate their recyclables, and they even have citywide composting. I thought to myself that soon enough my vegetable scraps would be decomposing somewhere in Berlin. From the foyer, I took this all in, thought once more of my scraps, and then trudged up the many flights of stairs to meet Wilfred, with whom I was to live. 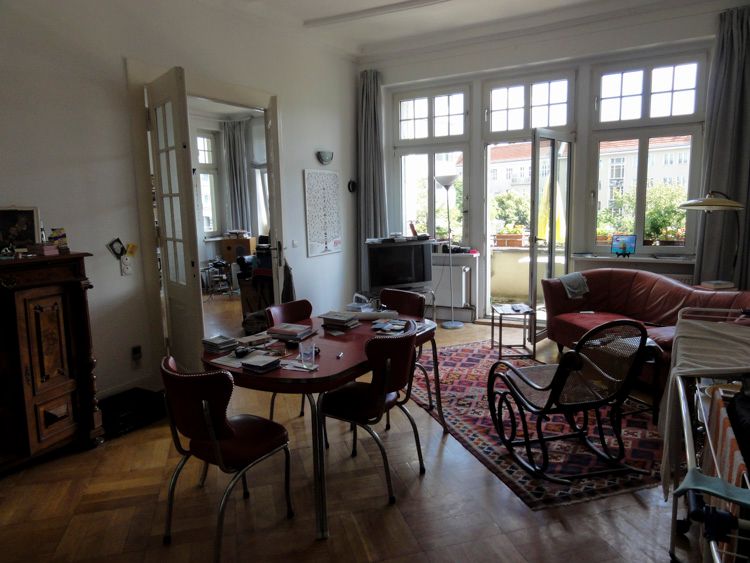 Wilfred is a soon to be retired college teacher of history, law, Spanish, and English (the German education system is entirely different from the States, and even though I've had it explained to me on more than one occasion, I'm not exactly sure how it all works). But I knew I would like living here when I found an entire hallway lined with books and films. I descried Goethe and Schopenhauer and books with Geschichte and Wissenschaft in the titles–you know–proper books. Since moving in, Wilfred and I have had numerous discussions, bei Kaffee oder Bier, concerning politics, culture, or American music and film. It's really quite nice; however, I hope by the end of my stay we can hold the majority of these discussions auf Deutsch.

But it is not only us two. Today, I met his son, Luka for the first time. He just returned from Fußball camp (he plays center striker, btw)–and he seems like any other 11-year-old boy, because, although he was polite with me, chatting and answering all the obligatory and mundane questions adults ask of children, he also politely asked his Vater and me if he could stop talking and just return to his computer game already. We obliged. Wilfred and Luka are leaving next week to tour Amsterdam on bike for a week or so, and then will bike through the city of Essen (I think) in West Germany. Oh, to be a Berliner!

The apartment itself is lovely. My room is large, and decked out with a nice desk, bureau, TV, reading chair, and all other kinds of amenities. I'm already as comfortable here as at home. The living room and kitchen are both nice, letting in lots of light and the crisp Berlin air. Other than that, everything is as you would expect it to be: there is electricity, hot/cold water, a washing machine, a dishwasher, WiFi, etc. etc.–it's not like I'm doing field work in the middle of Central America! Yet, there is one grievance, which I'll address in a later post, but it has been named affectionately (by the Brits, I think), as the problem of "the continental plate."

Finally, I was sold on living in Berlin, and in this apartment in particular, when, upon my return from the grueling placement exams at the Goethe Institute, Wilfred offered me dinner: freshly made pesto from the purple and regular basil growing on his balcony garden. So, we had pasta with pesto, red wine, and, finally, a toast to my next two months in Berlin.